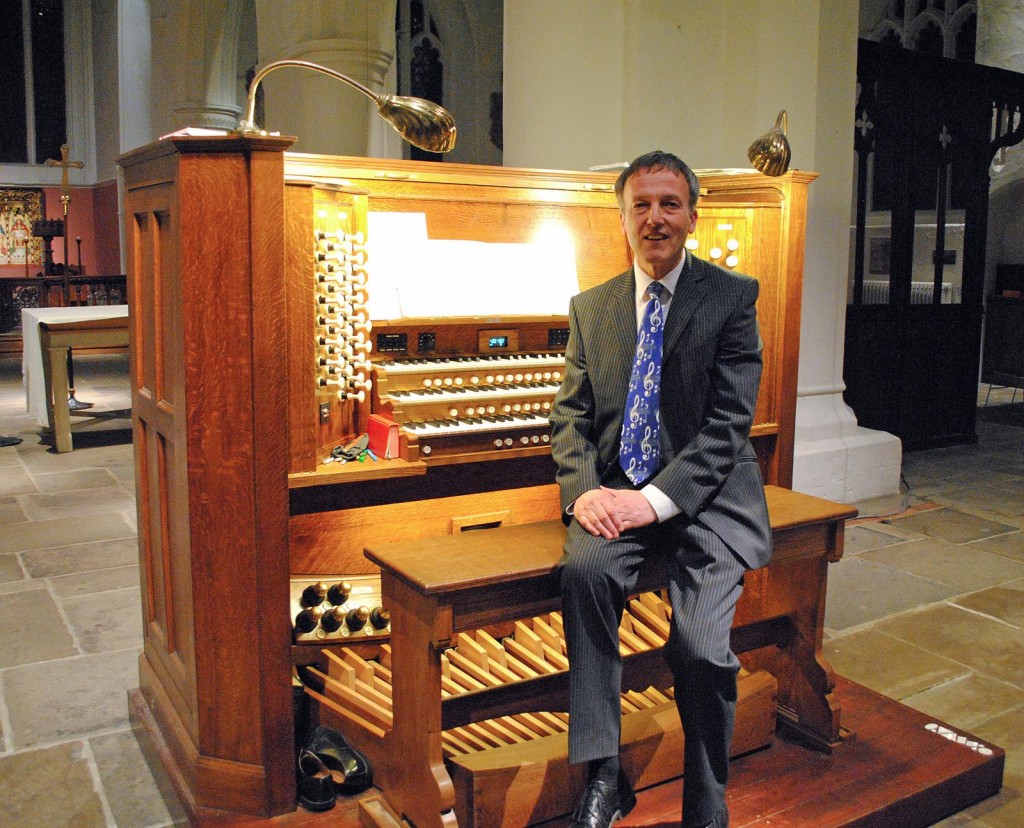 Bach was the greatest organist the world has ever known, and so it was fitting for the Tilford Bach Society to hold an organ recital on the splendid organ at St Andrew’s Parish Church, Farnham. The recital was generously sponsored by Pete and Rosemary Wisbey, who have been attending TBS concerts since they were teenagers. The St Andrews organ has a movable console and it was placed in full view of the audience so that the recitalist, Stephen Lacey, could be seen and communicate directly with his listeners. First he sketched the history of the church and its organ and explained the different families of stops and how they were used in the pieces to be played (a specification of the organ having been thoughtfully given to those attending the recital). Stephen’s first piece was Bach’s famous Toccata and Fugue in D minor: the showy, brilliant toccata being followed by a nicely-judged performance of the fugue with good contrasts between the manuals, leading to a fiery finish. It was followed by the Air from the same composer’s Suite in D: Stephen had clearly gone to a great deal of trouble to determine the exact registration that would make the organ sound like the orchestral original. The Gavotte from William Boyce’s Symphony No. 4 was given a straightforward, rhythmic performance. Boyce had been the organist at the Temple Church, where he was succeeded by the blind organist John Stanley, and it was Stanley’s Trumpet Voluntary that was played next, first in a registration that might have been adopted when played on a small organ in Stanley’s day, the sound of the trumpet being built up with a series of different stops to give a tone confusingly called a “cornet” stop, accompanied on another manual for which the oldest pipes in the organ were selected. For the reprise the Herald Trumpet was called into play and pedals were used – an interesting contrast. Dvořák’s famous Humoresque was given a delicious performance on the quietest stops, very delicate. Back to Bach for the final piece in the first half: his mighty Passacaglia and Fugue in C minor, a romantic account of this great work. Like the Dvořák piece, it was very delicately played, at least at first, but it built up to an impressive climax just before the beginning of the fugue, which received a powerful performance. The second part of the recital opened with the Mohrentanz by the early sixteenth-century composer, Tielman Susato, a delightful and cheerful piece. It was followed by a very effective arrangement of Elgar’s famous Chanson de Matin. Then the Suite Gothique by Leon Boëllmann, well known to organists, in which the second movement, the Menuet Gothique, danced along beautifully. Bach’s “Jig” fugue received a particularly quick performance and the Popular Song from William Walton’s Façade suite was clearly a piece that Stephen loved playing. The final item on the programme was the famous Toccata from Symphony no. 5 by Charles-Marie Widor, a piece many organists have to learn because it is demanded at so many weddings. Stephen’s performance was fast enough to be exciting and moderate enough to produce the articulation demanded by the composer – a difficult balance to achieve, which brought the recital to a very satisfactory conclusion. But that was not quite the end: as an encore Stephen gave Pietro Yon’s delightful Humoresque “L’Organo Primitivo”, Toccatina for Flute, which went down very well. John Mansfield

Pete writes: “It is with the greatest pleasure that Rosemary and I are sponsoring tonight’s concert in gratitude for all the magnificent music that we have enjoyed thanks to the Tilford Bach Society. Rosemary must be one of the longest serving adherents of the TBS, but I hasten to add it’s because she started as a young student. She was taught by Barbara Gregory, Greg, the first secretary who encouraged her to go along and help with the interval refreshments at the Institute and then she stayed on for the concerts. She was once caught by Dr Thornton Lofthouse playing his harpsichord, but he didn’t seem to mind. When I came along we went to concerts together and have been doing so ever since. Thanks to our Directors of Music over the years, Denys, Paul Nicholson, Laurence Cummings and Adrian Butterfield we have enjoyed the services of professional players and singers at the top of their game. And we know that the many familiar faces that turn up year after year, particularly at the Festival, come because they enjoy performing at Tilford.

Despite the differences that arose with some of the players, Denys Darlow was probably twenty years ahead of his time when he took the Society down the road of authentic instrumentation. One of the highlights for us has to be “Nigel of Tilford” in 2010, the opera for which Rosemary wrote the libretto. And it’s thanks again to Greg because she read the Conan Doyle story “Sir Nigel” to Rosemary’s student group which gave her the inspiration many years later for “Nigel of Tilford”. The idea for an organ recital is largely mine. I spent eighteen years on the TBS organising committee, fifteen as the chairman and desperately tried to arrange a recital and never succeeded. Tonight the organ is played for us by Stephen Lacy that we have known for many years since Rosemary was a member of the North Hants Organ Society. We hope you enjoy the music as much as we will.” Rosemary and Pete

Stephen was born in West Byfleet in 1957. He began his musical career studying the piano at the age of 7. He was a chorister at St Andrew’s Frimley Green from 1966 and subsequently had organ lessons with Ken Sargeant. At 18 he studied organ with John Birch and piano with Ruth Gerald at the Royal College of Music, gaining Associateship in 1978.

Between the years 1978 and 1981 he was organist and choirmaster at Holy Trinity church, Hawley. From 1982 and 1998 he was organist at St Mary’s Frensham, and is currently Director of Music and organist at St Andrew’s, Farnham. Stephen has been duty organist at Aldershot crematorium for over 30 years, and teaches piano and organ at home. He regularly accompanies for a local school choir, accompanies various Associated Board exams, and has also played for the Cantabile singers at Winchester and Guildford Cathedrals.

When not performing, accompanying, or teaching, Stephen will be found in the garage restoring, servicing or tuning pianos! Married to a flautist, with two children and a delinquent dog, Stephen spends any free time gardening, exploring Roman archaeology and drinking malt whiskey!