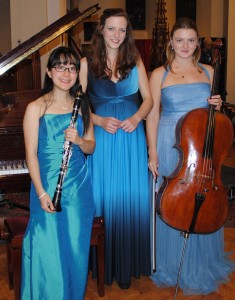 Last year the Tilford Bach Society heard an outstanding group called the Reinhart Trio perform at Farnham Castle. The high standard of their performance resulted in calls for another visit and, on 23 November, at the Church of St Thomas-on-the-Bourne, Farnham, the TBS members convened for a continuation of this excellent music.

There was a slight surprise in that the composition of the trio had altered with a clarinettist now replacing the flautist who was unable to take part. But there was no disappointment in the quality of the music that was offered by Anna Hashimoto (clarinet), Elena Kiseleva (piano) and Tatiana Chernyshova (cello).

The opening piece was Beethoven’s Sonata for Piano & Cello in G minor Opus 5. From the opening, with a powerful sequence for both instruments, the tone and the total confidence of the performers told the audience that this was a group that is very accomplished, confident and totally synchronised. The composer would have been totally satisfied and the audience was uplifted by the piece.

The second item, the audience was warned, may not be quite so uplifting because Brahms had written his Trio in A Minor Opus 114 as death approached and this was reflected in the spirit of the music.

The second half of the concert moved the audience from German to French and Latin composers. The Saint-Saens Clarinet Sonata in E flat Major Opus 167 gave Anna Hashimoto, the clarinettist scope for showing her great skill with this most harmonic instrument.

The final item was an unusual piece – Four Seasons in Buenos Aires by Astor Piazzola. All the movements, originally written as separate pieces, are written in tango time. This finale was enthusiastically received by the appreciative audience.