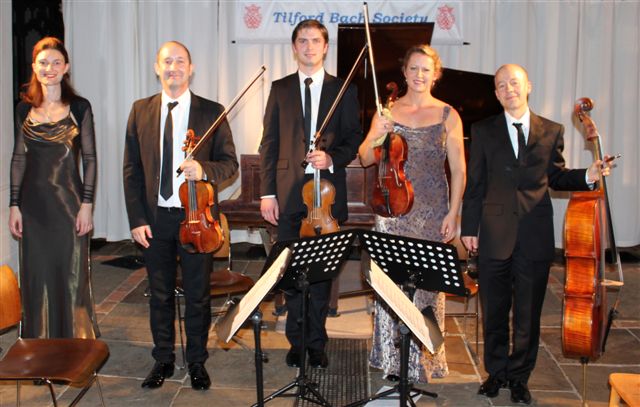 The internationally acclaimed Tippet String Quartet made their first visit to Farnham in a concert at St Andrew’s Church last Saturday.  The programme opened with a masterly performance of the last music Josef Haydn ever wrote: two movements for a quartet in D minor which suggest no waning of the great and prolific composer’s powers and end in a great flourish.  However, he poignantly wrote on the score, ‘Gone is all my strength, old and weak am I’.

For the other two items the quartet was joined by pianist Emma Abate, who had performed in Farnham only a few weeks ago.  Robert Schumann’s Piano Quintet in E flat amply demonstrated her star quality.  The composer’s sister Clara was to have performed in the 1842 debut but she became ill so Felix Mendelssohn was persuaded to take her place, being the only other pianist Schumann trusted to tackle the ‘fiendish’ piano part.  However, there is a great deal more to this piece than virtuosic fireworks: the second movement is a quiet, subtly scored funeral march and the dashing Scherzo of the third movement gives way to a fugal arrangement of the opening theme.

Dvorak’s Piano Quintet in A major, which ended the concert, showed the composer’s love of his homeland, incorporating Czech dances and folk songs in a work of wide-ranging moods that gave all five musicians ample scope to shine.  Altogether it was a well chosen programme which delighted its audience, many of whom were attending for the first time. 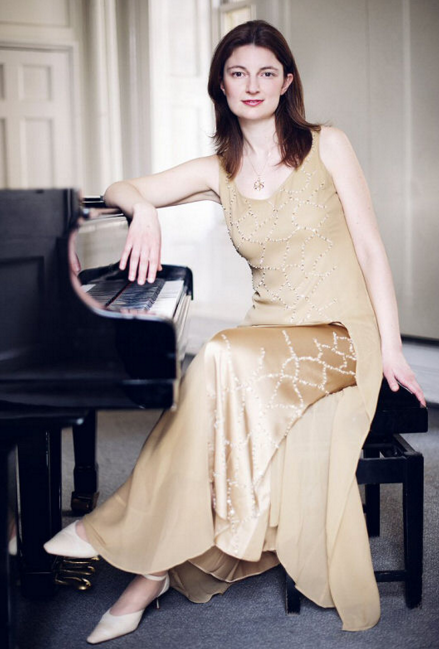 Described as “an amazingly talented pianist” by the leading Italian magazine Musica, the Neapolitan pianist Emma Abbate pursues a varied career as a chamber musician and vocal coach, working with some of the finest singers and instrumentalists of her generation. She has performed in duo recitals for international festivals and concert societies in Salzburg, Lisbon, Naples, Ischia, Koscierzyna and Sorrento, and at many prestigious UK venues such as the Wigmore Hall, Southbank Centre, Royal Opera House, St John’s Smith Square, St George’s, Bristol and Aldeburgh Festival, in addition to broadcasts on BBC Radio 3.

Emma is planning a series of recordings devoted to 20th century Italian vocal chamber music, the last of which is the world-première disc of Shakespeare Sonnets by Mario Castelnuovo-Tedesco with the baritone Ashley Riches for Resonus Classics. Emma also released L’Infinito for Urania Records with the mezzo-soprano Kamelia Kader. Her discography also includes world-premières of works for cello and piano by Krzysztof Meyer and Algernon Ashton with the cellist Evva Mizerska. Published by Toccata Classics, their performances have been praised by The Strad for their “great expressive range and impressive authority”. Future projects include the world-première recording of Stephen Dodgson’s Piano Quintets together with the Tippett Quartet.

Based in London, Emma is a professor at the Guildhall School of Music & Drama. Following her graduation from the S. Pietro a Majella Conservatoire in Naples at the age of only 19 and an Advanced Diploma from the S. Cecilia Conservatoire in Rome, Emma studied in London with Yonty Solomon. She completed her studies with Geoffrey Pratley and Patsy Toh as a scholar at the Royal Academy of Music, from where she was awarded the Postgraduate Diploma in Accompaniment with Distinction. Her many prizes have included the Anglo-Czechoslovak Trust Award, the International Ibla Grand Prize as Distinguished Musician, the Grover Bennett Prize and the AMA Calabria Award. She was also awarded an Italian Literature and Culture degree cum laude from the Federico II University in Naples.

For over a decade and a half, the celebrated Tippett Quartet has delighted critics and audiences alike with its animated, virtuosic performances and its inspired and attractive programming. They have performed at the BBC Proms and numerous festivals throughout the UK and abroad, including tours of Europe, Canada and Mexico. The quartet regularly appears at Kings Place, Purcell Room, Wigmore Hall, Queen Elizabeth Hall and Bridgewater Hall and frequently performs on BBC Radio 3. Their broad and diverse repertoire highlights the Tippett Quartet’s unique versatility. They are equally at home with the giants of the classical world as they are with great Hollywood composers. They have recorded for Naxos, EMI Classics, Signum, Classic FM, Guild, Real World, Dutton Epoch and Toccata Classics.
The quartet has given numerous world and UK premieres including works by John Adams, Howard Goodall and Stephen Dodgson. 2013 saw them rediscover Gustav Holst’s Fantasy on British Folk Songs which, with the help of the eminent musicologist Roderick Swanston, they were able to complete and give a world premiere on BBC Radio 3. They have also worked with Peter Maxwell-Davies for a performance of his 9th Quartet at the Southbank, with Anthony Payne on his Quartet No.1 for a live BBC broadcast from Spitalfields Festival, and Hugh Wood on his String Quartet No.3 at the Presteigne Festival. They have had the great pleasure of collaborating with inspirational soloists such as Kathryn Stott, Craig Ogden, Stephanie Gonley, Lawrence Power, Melvin Tan, Nick Van Bloss, Julian Bliss and Ashley Wass.
The Tippett Quartet have also performed with the Royal Ballet at Covent Garden and have premiered a newly written film score for Alfred Hitchcock’s 1927 silent film classic ‘The Lodger’. This year also sees them collaborating with some of the UK’s finest Jazz musicians in the launch of their ‘Close To You’ project – a tribute to the album that Frank Sinatra made with the Hollywood String Quartet. 2014 has seen the release of a recording of Lutoslawski and Panufnik Quartets for Naxos. www.tippettquartet.co.uk

Anyone aged 8-25 may attend FREE thanks to CAVATINA if they enter their name and date of birth on a form at the door – no advance notice needed .

Parents and teachers may attend FREE if they bring children.
All 8-25 year olds FREE

We do not issue physical tickets for the concerts in Farnham but record advance payments and check names on the door.
Refreshments are free but we invite donations of £2-50 for wine and 50p for juice towards the costs. (£1 towards drinks and cakes when at Farnham Methodist where wine is not available)
You can pay in advance by credit card using PayPal by clicking one of the following links (you can adjust the number of tickets needed in the Paypal shopping cart). You do not need to have a PayPal account: