A celebration of 150 years of Tilford Church!

First ever performance of Christmas Oratorio in Tilford

Due to illness Bradley Smith was replaced by Sam Boden

With trumpets and drums and a glorious choir, the Tilford Bach Society made a joyful contribution to Tilford Church’s 150th anniversary celebrations last Saturday.  Amazingly, this was the first performance of Bach’s Christmas Oratorio in the society’s 65-year history, made possible by generous donations by several members.

Adrian Butterfield directed from the violin in true baroque style and London-based Pegasus Choir was at its best, bringing smiles to the faces of the packed audience from the first ‘Shout for Joy’ to the final chorus of affirmation.  Four superb soloists narrated the familiar Christmas story, interspersed with contemplative arias which were accompanied by different sections of the London Handel Orchestra.  These included oboes d’amore and da caccia, which added a pastoral flavour to the scene of the shepherds and the gentle lullaby ‘Sleep, my dearest’, exquisitely sung by alto Robin Blaze.  Another highlight was the appearance of the angel: soprano Joanne Lunn’s voice was as clear and bright as a shaft of light as she imparted her good news to the frightened shepherds.  Tenor Samuel Bowden was the main narrator, so expressive that he drew the audience in to experience the wonders he was describing, and Andrew Mahon’s powerful bass voice rang out in the aria ‘Great Lord and Mighty King’, later becoming a chilling King Herod.

The audience roared its applause for a truly unforgettable experience, and quite the best introduction to the Christmas season that anyone could ever hope for.

A portative organ was installed to provide the continuo, its owner and builder Mr Jennings remarking that Tilford Church was the most challenging location he’d ever had to deliver to although it has travelled all round Europe for John Eliot Gardner’s Bach pilgrimage.  ‘Tilford made arrival by crane from a canal boat at Venice seem easy’ he added. Photos below confirm this! 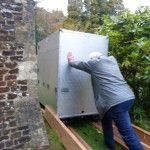 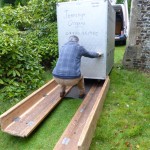 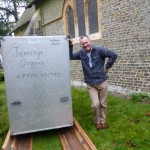 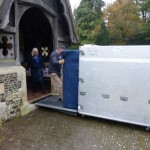