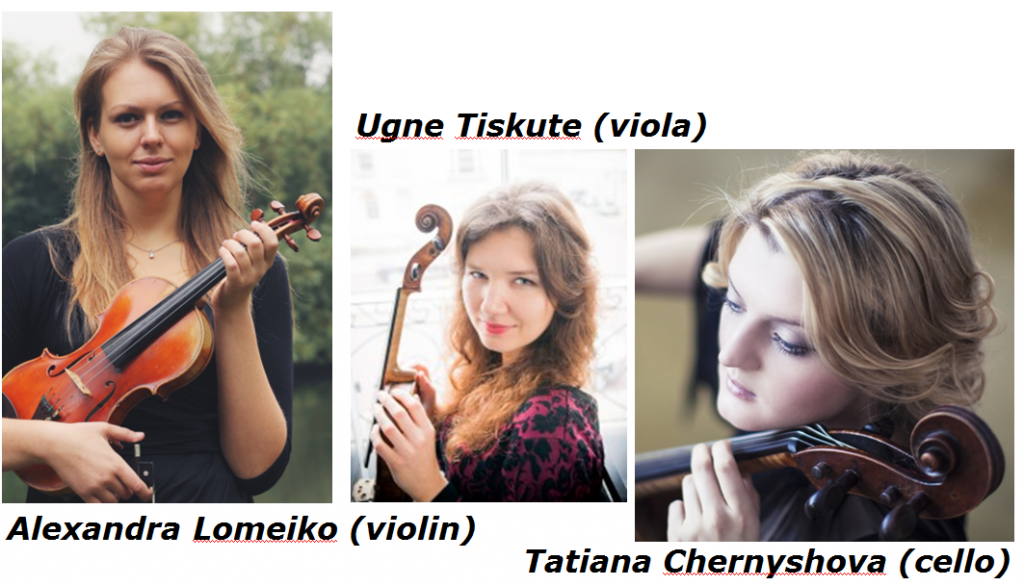 This is a repeat of the highly successful concert that we held in February. Unlike or normal concerts this concert is free but with a retiring collection. All profits will go towards the funds of St Peter’s Church, which is a beautiful historic building dating from the 1200s.

The Goldberg Variations were originally written for the harpsichord and have become one of Bach’s most famous compositions. They became especially well known as a result of recordings by the Canadian pianist Glen Gould, but they have also been transcribed for several other arrangements of instruments. This transcription for string trio by Dmitry Sitkovetsky is becoming increasingly popular since it brings out the emotion and different colours of the music more vividly than other arrangements.

The Goldberg String Trio comprises three young professionals who are each rising stars in the musical world and have formed the trio at our request especially to play this wonderful music.

Please note that there are no advance seat allocations for this concert.

“When I first wrote my transcription of Bach’s Goldberg Variations for String Trio, in 1984, it was both a labour of love and an obsession with the 1981 Glenn Gould recording. For two months I probably had the time of my life, musically speaking, being in the constant company of Johann Sebastian Bach and Glenn Gould.

Generally, at that time, transcriptions were out of fashion and I recall that my own colleagues and managers were sceptical about such an audacious idea.

Since then my transcriptions have been played all over the world, and moreover they have opened the floodgates of new interpretive possibilities for the piece which have included solo harp, wind instruments of all kinds, saxophone quartets, Renaissance viols and even a fascinating concoction of Uri Caine, among many others.

I hope listeners will share in my life-long journey through the Goldberg Variations and my love of the music, indeed in the very first publication of the Variations, in 1742, J. S. Bach states that the spirit of the piece is “for the enjoyment of music lovers”.

You can listen to Dmitry Sitkovetsky playing his transcription HERE .