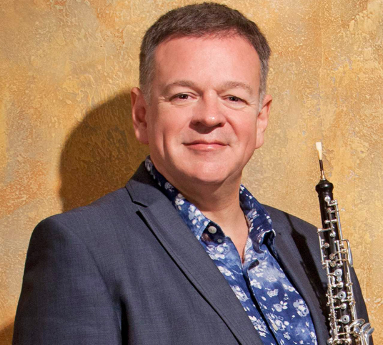 Nicholas Daniel has long been acknowledged as one of the world’s great oboe players, and is one of Britain’s best known musicians. In a distinguished career that began more than four decades ago he has become an important ambassador in many different musical fields, and has significantly enlarged the repertoire for his instrument with the commissioning of hundreds of new works.

Nicholas dedicates his life to music in many varied ways. He records and broadcasts widely, including regular recordings on the Harmonia Mundi Label, and he boasts a huge following internationally on social media. He is proud to support and patronise many important initiatives, charities and trusts, and has directed several music festivals and concert series, most notably in Germany and Dartington, and has been Music Director of the Leicester International Music Festival and lunchtime series for many years.

He has been a concerto soloist with many of the world’s leading orchestras and conductors, performing a huge range of repertoire from Bach to Xenakis and beyond, premiering works written for him by composers including Harrison Birtwistle, Henri Dutilleux, James MacMillan, Thea Musgrave, John Tavener and Michael Tippett, as well as encouraging many younger composers to write for the oboe. His recording of concertos by Vaughan Williams and MacMillan was awarded the BBC Music Magazine Premiere Award in 2016.

As chamber musician Nicholas is a founder member of the award-winning Britten Sinfonia, the Haffner Wind Ensemble and the Britten Oboe Quartet, whose debut disc was released to great acclaim on the Harmonia Mundi label in 2017. He also works regularly with the pianists Charles Owen and Julius Drake, and with many leading string quartets including the Carducci and Vogler. He is principal oboist of Camerata Pacifica, California’s leading chamber music ensemble, and is a popular guest at music festivals all over the world.

Children who can sit quietly are most welcome. All under 26s may attend FREE thanks to CAVATINA if they enter their name and date of birth on a form at the door – no advance notice needed.

Parents and teachers may attend FREE if they bring children who need to be accompanied (typically up to 16 years) but they should email chairman@tilbach.org.uk at least 2 days before the concert to register.

We do not issue physical tickets for the concerts in Farnham but record advance payments and check names on the door.

Refreshments are free but we invite donations of £2-50 for wine and 50p for juice towards the costs. (£1 towards drinks and cakes when at Farnham Methodist where wine is not available)
You can pay before the date of the concert by credit card using PayPal by clicking one of the following links (you can adjust the number of tickets needed in the Paypal shopping cart).
You do not need to have a PayPal account:

We want to keep tickets affordable, but ticket sales cover only one third of the costs of these major concerts, so please make a further donation if you can or become a Sponsor (Details HERE).

If you do not wish to receive emails on future concerts please either unsubscribe when you receive your first email or buy your ticket on the door.