An evening with Composer Matthew Taylor 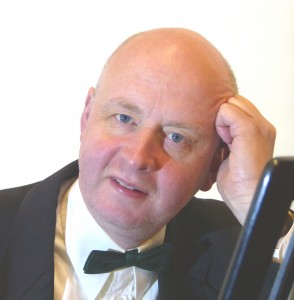 “So Beethoven has always been central to all my thought processes as a composer. I still find more life force in his work than in any living composer.”

“We do not compose, we are composed” (Mahler)

In this new venture for TBS, Matthew talked about his approach to composing today, played recordings of the pieces of music that have most influenced his life and also played some piano pieces himself. He answered questions such as:

“Have all the best ideas been written already?”

“What is the character of the music you aim to compose and how does it relate to contemporary and historical trends”  ie what is the niche you aim for?”

How do you physically write music, on paper, on computer, where do you start?

“How do you get an idea in the first place?”

“How do you cope when nobody seems to like what you are writing.”

“How can a composer survive today?”

“Many people ask me why I’m a composer. Since an early age I have had a passion to write music, rather than the urge to ‘be’ a composer. The creative urge started very early on – I was played LP’S of Beethoven symphonies as a kid, and they knocked me flat. I wanted to do something like that myself. Of all the things that excited me in the music I think it was the sheer epic nature of these works, their life force which made such an impact and still does. I’ve never consciously imitated his works – that would merely result in weak Beethoven, rather I have studied how he achieves his power, his lyricism, how we get to know and recognise this indomitable spirit through the music.

My other early love was Schumann. He was probably blessed with the most natural gift of composing simple music for children whilst remaining completely himself. He was also the most perceptive critics that ever lived and one of the most generous hearted musicians who devoted far more energies into promoting other people’s music rather than his own. The great piano works reveal Schumann’s world to us, his loves, his friends, his colleagues, his dreams all  stemming from this rich imagination.

Bach and Brahms are also two of my Gods, as is Haydn. I’ve always been drawn towards Nordic culture, having found a strong affinity with all Scandinavians, their openness, decency and highly civilised outlook upon life. Sibelius and Nielsen are lifelong heroes of mine, though I’m very drawn to Mahler also but for different reasons.  I don’t find such an instant appeal with all British music, though Tippett and Vaughan Williams have made a great impression on me as has the music of Robert Simpson who was something of a mentor in earlier years. And closer to home, so to speak, I have great affection for the music of Malcolm Arnold, John McCabe, David Matthews and many others also.

Walking has been one of my great passions since childhood and I try to do a vigorous walk every day in some of the magnificent surrounding woodland around Farnham.

I greatly enjoy going to the theatre, and am a massive admirer of most recent RSC productions. I have recently become a proud member of the Wine Society. Where would we be without fine wine I ask you?”