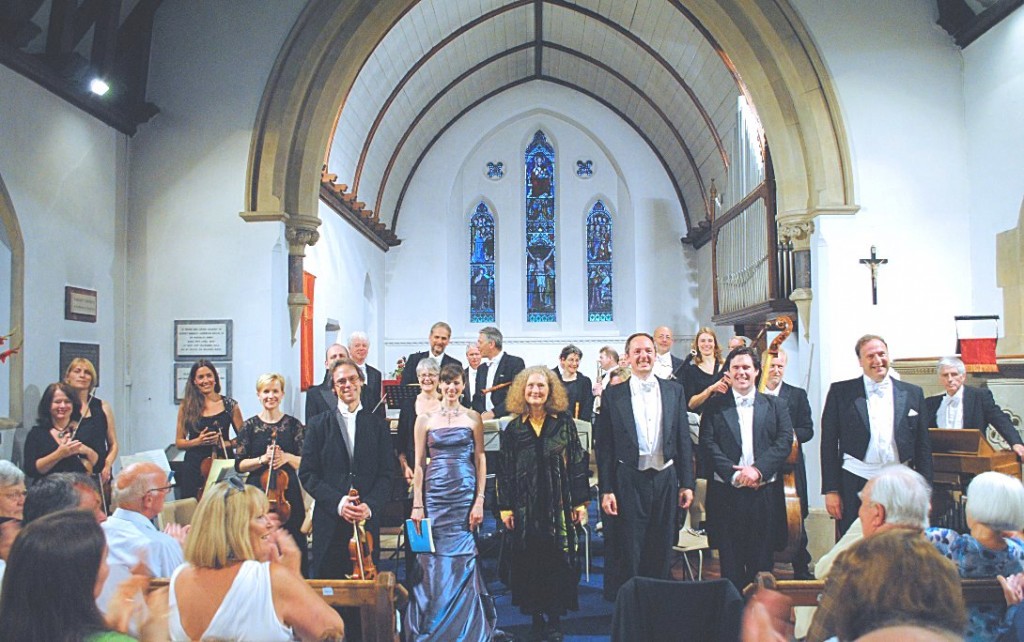 The final concert of the Tilford Bach Festival is traditionally a grand climactic event that attracts a wide audience of TBS members plus visitors from afield. This year was a complete sell-out long before the festival started.

A visit by the renowned English soprano, Dame Emma Kirkby, produced a similar effect to that 7 years ago when she last visited – a full house and massive interest by an audience keen to hear this living legend.

The works performed this year were a mixed programme rather than a single choral oratorio or mass.

The opening item was CPE Bach’s Symphony in C Major for Strings, a brisk and highly enjoyable work that reassured us that the London Handel Orchestra was still of the highest quality.

The second item was a substantial cantata by the father, JS Bach himself: Ershallet, ihr Lieder. Composed to celebrate Whitsun, it focuses on the completion of the trinity by the coming of the Holy Spirit. The number three therefore recurs in the work in various forms, including the use of triple timing and the use of three trumpets which, with the timpani, forms one of the three “choirs”; the other two being strings plus bassoons and choir plus continuo.

The cantata was a superb performance. The singers for the concert were Emma Kirkby (soprano), Elizabeth Cragg (soprano), Robin Blaze (alto), Nicholas Mulroy (tenor) and Matthew Brook (bass). The prominent use of trumpets in this piece was electrifying, something repeated in the final piece.

The final item of the concert, which comprised the entire second half, was JS Bach’s Missa in B Minor BWV 232 Kyrie & Gloria. This is effectively the first version of the mass that is now known as the Mass in B Minor, a major work of much greater length that Bach completed in the last 3 years of his life, but never heard performed. That expanded work is nowadays performed on a grand scale with large choirs and orchestras, though this was not the way dictated by Bach in his scores and this performance was therefore probably more authentic.