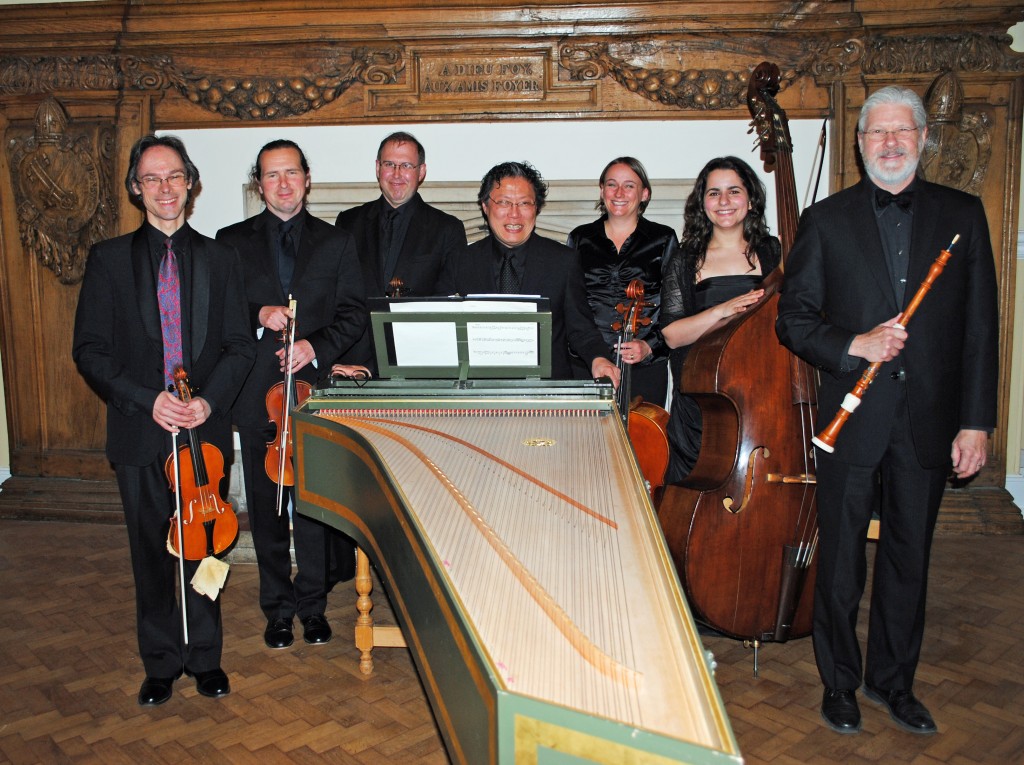 The sixty-first Tilford Bach Festival opened at Farnham Castle with an invigorating breath of Canadian fresh air from the oboe of John Abberger.  One of North America’s leading exponents of Baroque music, he brought his ensemble ‘Four Centuries of Bach’ to join Tilford Bach Society’s director Adrian Butterfield in a programme of music reconstructed and re-scored from often fragmentary and ambiguous early sources.

So the fascinated audience heard several familiar works performed in new ways, and many were even convinced by the charismatic soloist that Bach’s second orchestral suite with its sparkling ‘Badinerie’, made so popular by the golden flute of James Galway, was really intended for the oboe.

Three of Bach’s organ Chorale Preludes, also arranged by Abberger for the ensemble, formed a less exciting item, beautifully performed but juxtaposing pieces of very similar mood, tempo and texture in a way J. S. Bach himself would never have done.  However, the final Bach concerto, reconstructed for oboe and violin from a score for two harpsichords, was highly successful, the exquisite slow movement in particular demonstrating a sensitive and memorable rapport between the two soloists.  The delighted listeners were treated to a second helping of the ‘Badinerie’ to send them happily on their way. 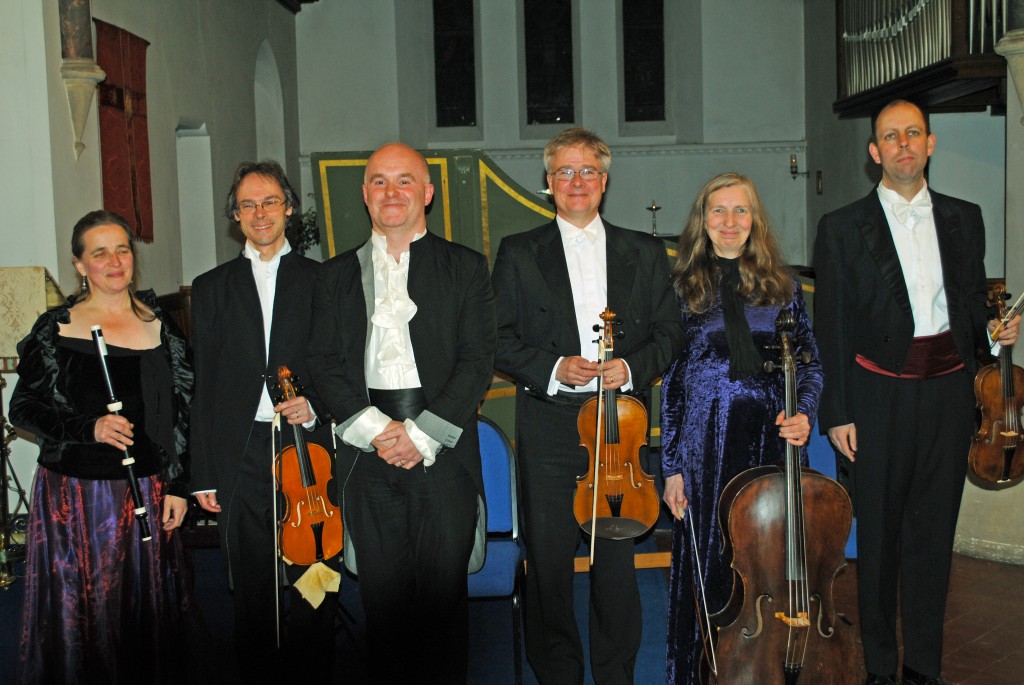 For the audience of Saturday’s concert at Tilford Church the highlight was undoubtedly the welcome return of the Festival’s former Music Director, Laurence Cummings.  In a programme entitled ‘Featuring the Harpsichord’ he remarked that he had never played so many notes in a single evening in all his life.

Laurence was joined by Tilford’s regular visitors, the London Handel Players, in a selection of Bach sonatas and concerti as well as two works by Bach’s contemporary Rameau.  These charming French pieces involved some outrageously flirtatious behaviour between the flute and the violin, so it was reassuring to remember that soloists Rachel Brown and Adrian Butterfield have actually been married for many years.

The previous concert’s theme of Bach reconstruction was continued by Rachel Brown who has successfully applied her creative skills to the partly-destroyed Sonata for Flute and Obbligato Harpsichord in A major.  And it was interesting to be reminded of the usual scoring of Bach’s Harpsichord Concerto in E major, having heard it arranged for oboe only the night before.

Having, as he said, ‘played so many notes’ it was extraordinary that Laurence chose part of the fifth Brandenburg Concerto as the ensemble’s encore.  In the lengthy cadenza section of phenomenal complexity and speed his fingers took flight in cascades of wonderful sound, prompting prolonged cheers and stamping from the rapturous audience. 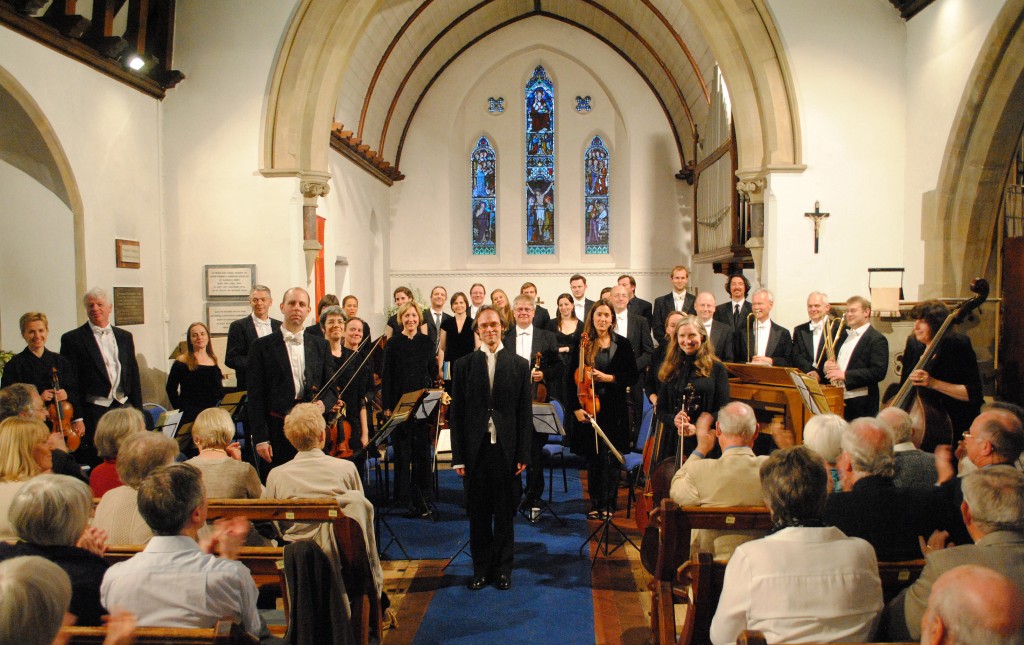 The final concert of each festival has traditionally been choral works by JS Bach and this year was no exception.

This year’s programme started quietly with the cantata BWV165 O heilges Geist – und Wasserbad (O holy font of Spirit and Water), a cantata for Trinity Sunday, being performed on that day. The London Handel Orchestra, under the direction of TBS Musical Director Adrian Butterfield, together with the choir and soloists from the Choir of the Theatre of Early Music (visiting from Toronto), delivered a warmly appreciated rendition of this piece.

The second piece was also a cantata for Trinity Sunday, written in 1726, one year later than the previous work and using a larger orchestra and larger chorus. The audience had its first taste of percussion and brass with the arrival of three natural trumpets.

Bach’s selective use of trumpets greatly enhances their impact when they are deployed and, at this concert, the effect was very stimulating during the remainder of the concert.

The second cantata, BWV 165 Gelobet sei der Herr, mein Gott (Praise be the Lord, my God) was a more powerful piece and introduced the audience to more of the soloists from Toronto whose interpretation and delivery was excellent throughout.

The interval allowed the audience to enjoy their drinks outside in sunny weather with a growing feeling of expectancy for a second half that promised much.

Bach’s Magnificat BWV 243 is demanding and extremely well known to TBS regulars. As the full visiting choir entered the small church, the audience tensed in anticipation of hearing one of their favourite works performed by a relatively unknown assembly of musicians led by their new(ish) Musical Director, Adrian Butterfield.

There was no disappointment. The singers and orchestra delivered an excellent performance that shook the foundations of the small village church. There was good attack in the choruses and excellent solo singing.
The final chorus Gloria Patri was everything the audience were then hoping for with, once again, superb trumpets that didn’t falter with all performers stretched to their limits. Adrian Butterfield has now delivered two excellent festivals for local music lovers.