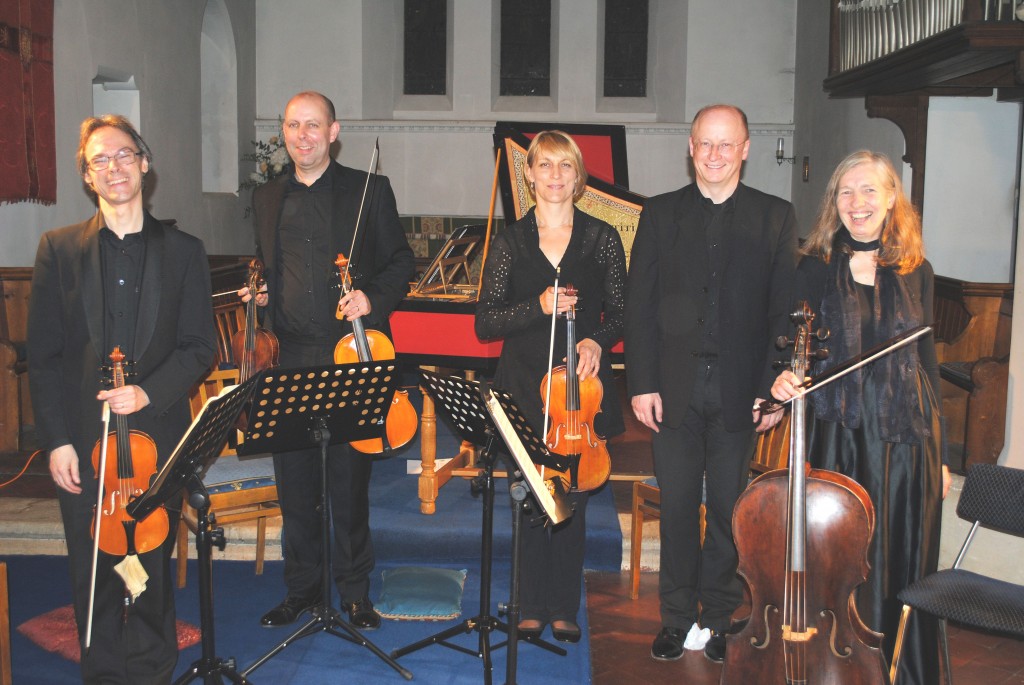 JS Bach wrote a wide variety of music, considering the period in musical history that he occupied. He was also, one can see in retrospect, a man of mathematical genius who probably saw music as an extension of mathematics. His music notation creates clear patterns on the paper which are spun in a variety of patterns and the music itself, of course, reveals those patterns as sound that interweaves between the instrumental voices that are employed. He would have loved computers.

The Art of Fugue BWV 1080 is a fascinating set of works that deployed many ways of imitating a theme and playing the imitations against each other. The work was published after Bach’s death and is incomplete, though it contains enough musical information for others to have completed it. The London Handel Players, under their director Adrian Butterfield, performed this work at the opening concert of the Tilford Bach Festival on 10 June at All Saints Church, Tilford.

The TBS audience greatly enjoyed the concert – it can be difficult to find a live performance of this work as it requires top flight musicians. The LHP are just such musicians and great favourites at the annual festival. There had been a set back with the illness of the planned harpsichord player, Robert Howarth, but James Johnstone was a worthy replacement. It was a superb performance with commentary from Adrian Butterfield who drew attention to certain facets of the composition.

The 14 fugues and 4 canons that comprise the work were received with rapt attention and great enthusiasm and then, at the very end, surprise – the work terminated in the middle of a bar! True to the memory of its eponymous hero, the Tilford Bach Society was not subjected to a single note written by another person!

Tilford church resounded at this event to the music of JS Bach again as Adrian Butterfield played two Bach Partitas for unaccompanied violin as part of the 2016 Tilford Bach Festival. Although renowned for his choral and organ works, Bach also wrote pieces for solo violin and cello which stretch the capabilities of instrument and player even today. The two partitas (numbers 1 and 2) consist of suites of movements written in the style of various dances of his day. The pieces sometimes require playing many notes simultaneously to provide the harmony, needing very careful fingering and bowing by the player, which is why these pieces are still considered the peak of the violin repertoire.

Adrian is Professor of Baroque Violin at the Royal College of Music in London and his rendition of these pieces on a baroque violin played with a baroque bow provided a master class in violin virtuosity. The sweet, pure tone provided by the gut strings rang to the rafters of the church. Adrian has studied the dances of Bach’s day, and this came out in his lively rhythmic phrasing which made the dances come alive. Brushing the chords that provide the harmonies, he gave these 300 year old pieces an individual character that made rewarding listening. The second partita ends in a famous chaconne, a 20 minute masterpiece of theme and variations which made a magnificent climax to an exceptional recital. The only sad note is that there were no young musicians listening to be inspired to pursue their own musical dreams by this demonstration of consummate musicianship. 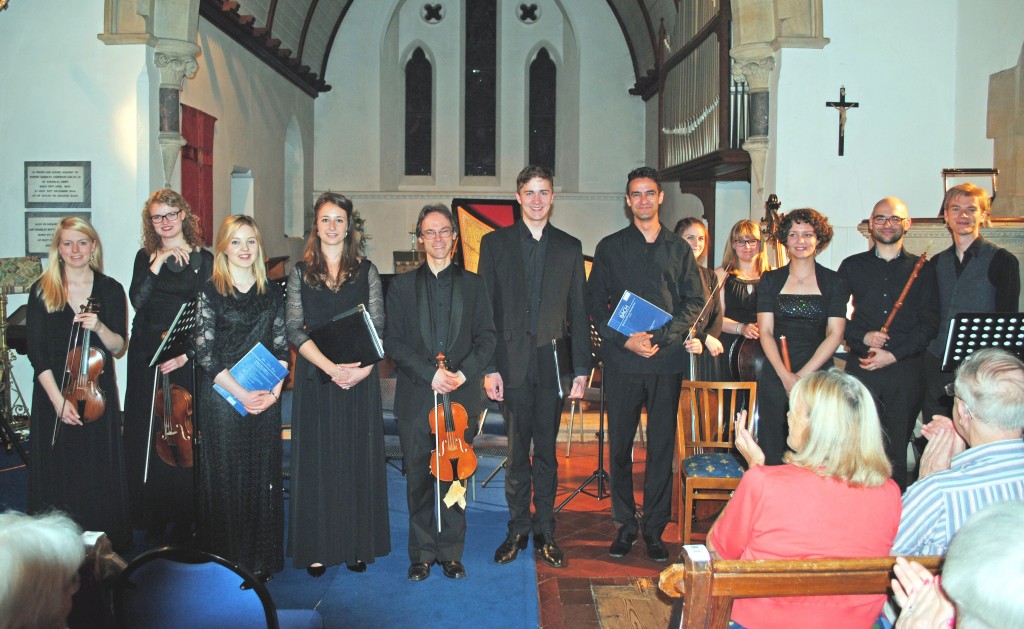 According to the programme, the performers of Saturday’s concert variously enjoy rollerblading, swimming and baking and their favourite musicians include Radiohead and Beyonce. Adrian Butterfield directed this youthful ensemble from his violin and from the opening moments it was evident that this was going to be a memorable occasion. Despite their youth, these were all highly accomplished and experienced musicians who delighted and impressed with their performance of three concerti by little-known baroque composers and two cantatas by J. S. Bach.

Flautist Flavia Hirte is a protégée of ground-breaking baroque flautist Rachel Brown and her performance of Karl Friedrich Abel’s Flute Concerto in G was as effortless and enchanting as blackbird song. Alessandro Marcello’s Oboe Concerto in D minor was so admired by Bach that he made a transcription of it and Polish oboist Jan Hutek brought out the range of moods, from the elegiac slow movement to the closing gigue. The third little-known composer was the Neapolitan Leonardo Leo, a leading composer of opera. Carina Drury performed his Cello Concerto which had highly operatic moments of lively dialogue and a brilliantly executed finale that sounded like peals of laughter.

Each half of the concert concluded with a Bach Chorale sung powerfully and movingly by soprano Rowan Pierce, alto Amy Lyddon, tenor Joel Williams and bass Daniel D’Souza, The first, ‘Prepare the way’, began with an exquisite soprano solo with dance-like accompaniment. The work also included a terrifying appeal to the listeners’ conscience from a very fierce Daniel D’Souza. The second, ‘Salvation has come to us’, gave another opportunity to enjoy the skills of the instrumental soloists, including a lovely flute and oboe accompaniment that complemented a soprano and alto duet. The final chorale was a powerfully expressed declaration of faith performed by the full ensemble. 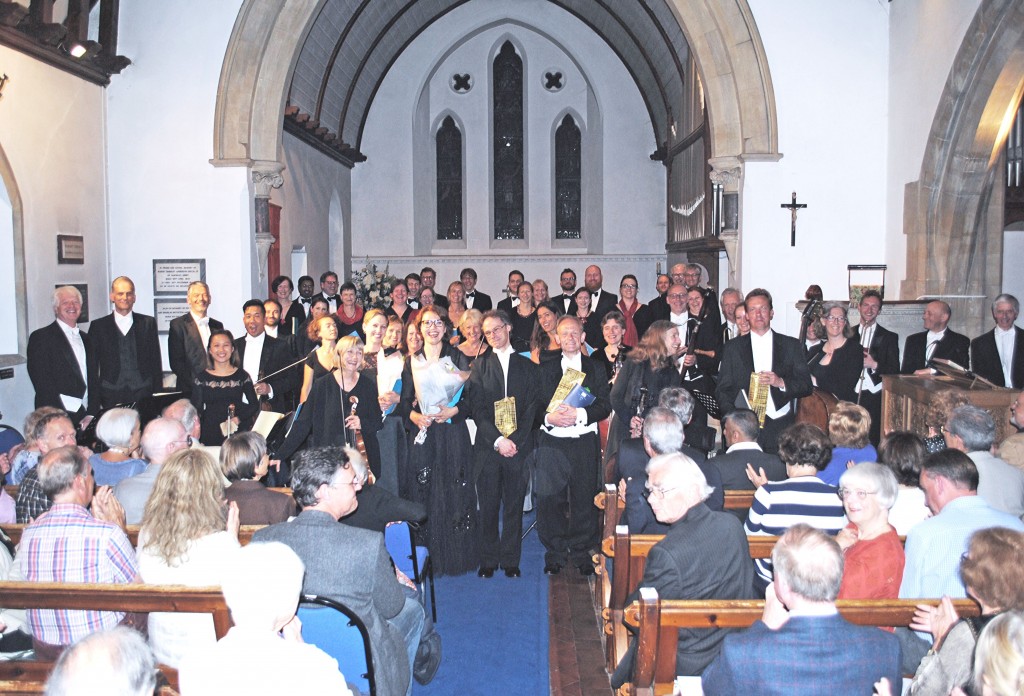 Could there be a more glorious finale to a Bach festival than a superb performance of Mass in B Minor? In traditional Tilford style, more than fifty musicians vied for space in a packed chancel and front-row audience members happily risked being poked in the eye by a baroque bow.

Conducted by Adrian Butterfield, Pegasus Choir with the London Handel Orchestra and world-class soloists Julia Doyle, Renata Pokupic, Charles Daniels and Stephan Loges, created a truly glorious and memorable performance. Three baroque trumpets and timpani helped raise the church roof in the climactic choruses and various solo instruments enhanced the arias. Particularly beautiful was the soprano and tenor duet ‘Dominus Deus’ delicately accompanied by baroque flute and pizzicato cello and bass. Anneke Scott astounded the audience with her accompaniment to the bass aria ‘Quoniam’, the instrument being a hefty baroque hunting horn with double coil. But the climax was undoubtedly the ‘Sanctus’ when choir and orchestra seemed to transport us all straight into the kingdom of heaven.