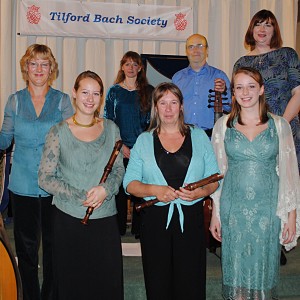 Music by by Henry Purcell and his French contemporaries

This was a very special event for baroque music lovers. The Eisenach Ensemble is a group that explores the rich repertoire of French and English Baroque. They performed a selection of songs and instrumental compositions by Purcell, Charpentier, Couperin, d’Anglebert and Marais.  Henry Purcell has come to be known as the “English Bach” and led the revival of musical performances in London around the time of the restoration. The style of his music is very closely related to the French style of the Court of Louis XIV. This programme has previously been performed twice at St John’s Smith Square and various other venues to great acclaim.

The seven-strong Eisenach Ensemble performed on instruments of the period, including a six-foot-long theorbo (best described as an overgrown lute), recorders, viol, harpsichord and portative organ.  The mellow sounds of the instruments complemented the purity of tone of the two sopranos, Cate McKee and Angela Hicks.  Their voices blended perfectly and their skilful ornamentations sounded fluid and effortless.

The aim of the programme was to demonstrate the influence of French music on the English composer Purcell and the first half comprised vocal and instrumental pieces by Charpentier, d’Anglebert, Marais and Couperin.  Part two was devoted entirely to Purcell, a cornucopia of songs and instrumental interludes amply demonstrating the influence of the English composer’s continental contemporaries on his music.  The gentle, pensive Purcell was represented in the songs ‘Charon the peaceful shade invites’ and the lovely ‘Evening Hymn’, and his more exuberant side by ‘Sing, sing ye Druids’ and ‘Strike the Viol’, but the highlight of the evening was undoubtedly the well-known duet ‘Sound the Trumpet’, exquisitely performed by the two sopranos with string accompaniment.

The Ensemble’s leader writes: “As performers we love Purcell’s music because it is energetic, young, fresh, and exciting; he knows how to write a really good tune.”